Tips and Information about making jewelry


With this blog, I hope to share my knowledge, successes, trials and errors, student's work, tips, and information about making jewelry. 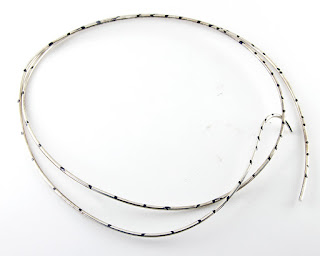 In my last blog I discussed annealing sheet and how annealing metal softens it so its more bendable. Wire anneals the same way. Heat it until its a dull red and then quench in water.

Flux or a permanent marker can be used to inform you of the metals temperature. Unlike sheet there is no center area to place the flux or mark. With wire, draw marks along the metal with a permanent marker, as shown in the above photo.

Heat the wire evenly and slowly by holding the torch high away from the metal circling over the wire heating it up. Then lower the torch flame closer to the wire and move very slow and watch the marks fade away as you move the torch.
You will see the wire relax and slump as its annealed.
Be careful not to move too slowly or you risk melting the wire, especially thin wire.

Annealing (metallurgy) is the process of heating metal altering the microstructure of a material causing changes in properties. In metalsmiting its used for softening the metal so that it is more pliable, bendable.

While opening a soup can, have you ever had the lid of a can not cut all the way off and so you bent the lid back and forth until it broke off? This is the process of "work hardening." The processes of hammering, bending, or  compressing metal work hardens the metal. Over working the metal causes it to crack or break. The metal must be annealed before it cracks or breaks and then the work process can continue.

Sometimes silver, copper or brass sheet comes already annealed and other times they are sold not annealed or hardened. If the metal is hardened it must be annealed before working the metal like bending or hammering. Annealing makes bending and sawing metal easier.

Once the metal is annealed it stays annealed until its work hardened. So, if you anneal metal and allow it to sit for years, it is still annealed. Time doesn't harden the metal.

The process of annealing is heating the metal to a specific temperature either with a torch or in an kiln. With a kiln you can set the temperature but with a torch you must watch the metal until it is a dull red color. The room must be darkened so you can see the metal's color. For beginners its had to see this. There are two easy ways to know when the metal is up to temperature.

Here are the complete steps:
Here is an interesting note, no pun intended. If you drop the work hardened metal onto a table it has a high pitch tone to it. Consequently, the annealed metal has a lower pitch tone!
Posted by Janet Alexander at 10:47 AM 1 comment:

Tips to Know About Jeweler's Sawblades 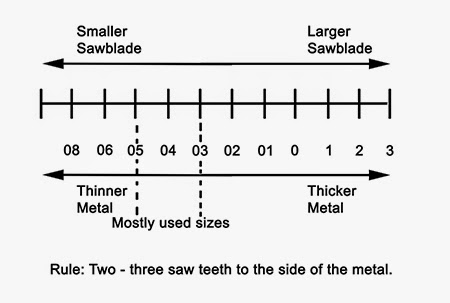 Saw frames come in several widths (throat depths). The depth allows for sawing deeper into a sheet of metal. For the most part, 3”- 4” is plenty deep for most sawing needs.
Posted by Janet Alexander at 4:00 PM No comments:

Can Fine Silver Really be Work-hardened? 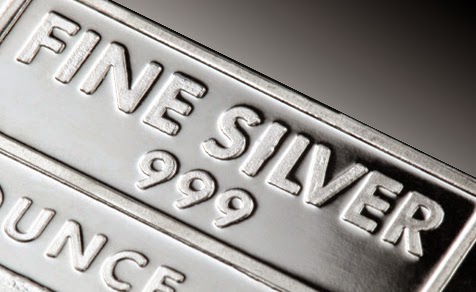 A question was asked online about how to work-harden fine silver. Someone had embedded fine silver wire into metal clay earrings and they wouldn't hold their shape. There was quite a bit of discussion on work-hardening fine silver.

I researched the answer and found this information.

What is a metal's hardness?

How is a metal's hardness measured?
There are several tests developed for measuring hardness, Mohs, Vickers, and Brinell. Through research, I found that Vickers is most often used for measuring a metal's hardness because it has one of the widest scales among hardness tests, known as the Vickers Pyramid Number (HV). The Vickers test observes the metal's ability to resist plastic deformation from a standard source.

So, use sterling silver in your metal clay earrings in order to gain the needed spring-hard hardness. Make sure you don't fire the sterling silver higher than 1300˚F (704.44ºC) or the metal becomes brittle.

There are a few ways to work-harden sterling silver.

According to Jörg Fischer-Bühner from Santa Fe Symposium® Proceedings, 2003. These are the steps for heat hardening sterling silver. 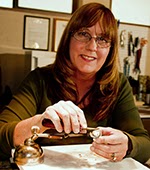 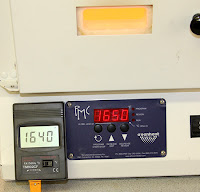 Now that most kilns have a computerized controller it’s become easier to control the kiln’s temperature. But, is the controller’s readout accurate? With so many varieties of bronze, copper, and silver metal clays, it has become important to know if your kiln’s temperature reading is correct. Otherwise, you may have problems with the clay not sintering correctly or getting too hot and melting. Additionally, the kiln should be tested for hot spots and cooler spots. Every kiln is different.

Testing can be done by using a pyrometer (which is how I used to adjust my kiln’s temperature before there were controllers) or by using kiln pyrometric cones. The pyrometric cones are supposed to bend when heated to a specific temperature for a certain amount of time. That means that pyrometric cones give a temperature equivalent; they are not simple temperature-measuring devices. According to a pyrometric cone manufacturer, cones have over 20 variables that can affect the cone’s bending, including the cone's composition, particle size of raw materials, type of forming process, moisture during forming, density of the cone, geometry of the cone, setting height, and angle and the heating rate. Atmosphere also affects bending behavior. Wow, that’s a lot of variables!  So, let’s look at testing with a pyrometer or a kiln test kit.

I used the kiln test kit sold by the PMC Connection. According to experts, the average kiln controller is accurate to ±10°F (±5.5°C) so keep this in mind while testing. Additionally, run the test several times but move the thermocouple to different areas of your kiln. Place it towards the back, near the front, off to each side, and etc. Test at different temperatures. I conducted tests at 1110˚F, 1200˚F, 1290˚F, 1470˚F, 1560˚F, and 1650˚F. I found that both readouts were within a few degrees of each other until the temperature got up to 1650˚F. Then they were off by 10˚F! So, I added another thermocouple from my casting kiln.  All three read different degrees but were within the accuracy range.

Now I know why my PMC3 clay had a crystalline look to it when I fired it at 1650˚F; it was getting too hot! So, now I lower the temperature of my kiln by a few degrees when setting it at 1650˚F. 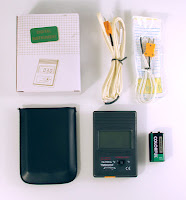 The Test Kit Includes:
Use the TP-02A thermocouple (larger one) for testing your kiln. It has a temperature measuring range of (-58˚F to 1650˚F). 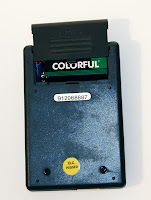 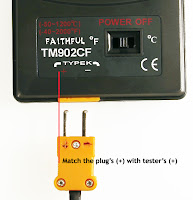 2.  Insert the plug into the bottom of the sensor reader making sure the plug’s polarity matches with the sensor’s polarity. 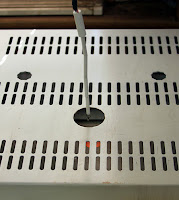 3.  Insert the thermocouple into the kiln.

Caution: Don’t insert it past larger ceramic end or the wires will burn! 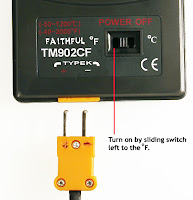 5.  Turn on the kiln and set it to hold at the test temperature for at least 15 minutes.

The sensor reader can read in Fahrenheit (F) or Centigrade (C). Turn it on by sliding the button from the center (off position) to the F (if measuring in Fahrenheit). 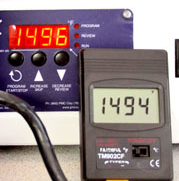 6.  The sensor displays its reading. Allow it a minute to stabilize to the temperature. Test at various temperatures. I found that my kiln was accurate until it reached over 1350 (F). 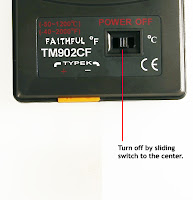 7.  When finished testing, turn off kiln and sensor reader and allow the thermocouple to cool before touching it.

How is the Tumble-Vibe different from a rotary tumbler? 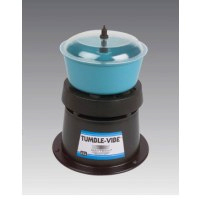 The basic difference between a vibratory and a rotary tumbler is the way the unit is driven.  A rotary tumbler consists of a barrel that sits on rollers causing the barrel to spin. Polishing media and the objects to be polished (jewelry pieces) are placed inside the barrel. As the barrel spins, the contents fall and slide over each other causing abrasion or polishing to the jewelry pieces located in the top 1-inch of the sliding media.  Jewelry pieces not located in the top inch are not polished. Some items can become dented due to the polishing media falling on the jewelry pieces.  It can take hours, days or weeks to bring a piece of jewelry up to a high shine using this type of unit. The lid on the barrel can leak or come off during the process.

A vibrating tumbler includes a bowl that sits on an out-of- balanced motor. As the motor moves, it causes the bowl to vibrate in all directions. The polishing media and jewelry pieces are placed inside the bowl. The bowl’s vibration causes the objects in the bowl to rotate around the bowl in two directions rubbing and polishing the jewelry 100% of the time. The items are polished much faster than a rotary tumbler and there is no chance of leaks, spillage, or denting of pieces. The items can be easily retrieved by opening the lid and fishing through the polishing media.

A variety of different media, from cutting, to polishing, can be used in the vibratory tumbler including ceramic and plastic abrasives, walnut shells, and steel shot, making the vibrating tumbler more versatile than a rotary tumbler. The ceramic and plastic abrasives are sold in different grits. Polish is embedded in the walnut shell with the same polish jewelers use on buffing wheels. Steel shot, due to its hardness, is used as a burnisher. As it moves across the jewelry it rubs and burnishes the outer layer of the metal.


General Instructions for the Raytech TV-5 Model
NOTE: THE TV-5 UNIT CAN BE USED WITH UP TO 4 LBS. OF STEEL SHOT/CERAMIC MEDIA AND JEWELRY.

No More Maring Your Metal While Holding it in a Vise

All jewelry tools are made smooth without teeth so that they don't mar the finish of your work. But, sometimes it's helpful to have a vise with gripping teeth to hold various objects.


If you buy a bench vise at a discount store, it's not necessarily made for working with non-precious metals while making jewelry. You may need to smooth it in order to hold a piece of soft silver without marring it. So what do you do?

To solve this problem and have the best of both worlds by covering the jaws of your vise grip with copper sleeves.

Viola! You have a nice smooth surface inside the vise. When you need to use the vise with teeth, remove the copper.
Posted by Janet Alexander at 3:04 PM 3 comments: 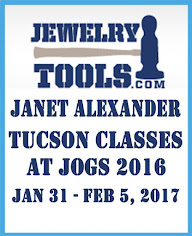 Metalsmithing Classes by Janet A

Janet Alexander
Ruidoso, NM, United States
Jewelry Designer, Instructor, and Author Janet Alexander is an accomplished metal artist with her work shown in museums across Texas, in magazines and books. She is a finalist winner for the 2015 Saul Bell Jewelry Design Award. She co-authored Metal Clay and Color: Inventive Techniques from 20 Jewelry Designers. She has over 40 years experience in jewelry metal arts. Additionally, she has over 15 years of experience teaching workshops, private classes, and classroom instruction. Janet can be found teaching at Conferences Shows, and her studio. Janet is a Sr. PMC Connection Instructor. She appeared on HGTV Crafters Coast to Coast and That’s Clever demonstrating her lost wax casting and wax carving techniques. Janet has a BFA in Metals from the University of North Texas and has studied metal working with several Master Jewelers.